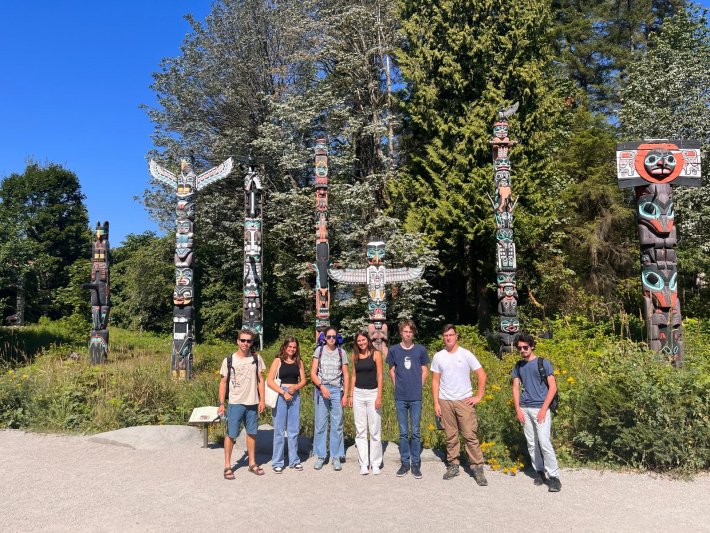 Everyone arrived safe at Vancouver airport. We went to Stanley park and saw totem pole. After a nice pic-nic on the beach we saw fireworks.

Sunday, the 31th We woke up with a beautiful breakfast made by Benoit and we ate home made pancakes (with peanut butter and maple sirup). Then the girls went to take a bath in the river while the boys went to fill up the bottles. At 11:30am we started the hike to stawamus chief peak. It was very steep because we only walked 2km but the elevation gain was 600m. We took a break to eat pic-nic, next to a big boulder. We then went up to the summit, where we enjoyed a beautiful view squamish bay. After that we came back from the summit and we ate a nice ice cream.

See you tomorrow for new adventures

Today, we woke up at 8 and after packing our bag we went hiking along the river and stopped to eat pic nic next to a lake.Then we made an activity about water and the way we use it and we took samplings of the lake’s water to analyse it. We continued the hike around the lake and got back to the cars and drove to whistler (the biggest ski resort in the world) to visit a little. We came back to the camp and washed (for some) at the river. The water was extremely cold 🥶 !

Today was moving day, we woke up very early in the morning to pack everything up and take the ferry to Vancouver island ! We had a beautiful view of the ocean although it was quite windy on the top of the ferry . We then took a break near a beach to eat our homemade sandwiches and quickly got back on the road in order to go to our new camping spot . We bathed in the lake where we took samples of water and studied the different chemicals in it . We made something to capture microplastics, that we will use in the near future.

We visited the waste water treatment plant and then the water supply facility Around Campbell river. We had a pique nique before visiting a museum explaining hydropower. Now we are preparing our backpacks to go wile cramping during 3 days and 2 nights. (There will be no wifi neither electricity...) So we won’t be able to post news for several days.

Two days ago we decided to go bivouacing on the side of the Elk river for two nights. On the first day we woke up pretty early to leave the camp and go hiking up the mountains. We hiked along the side of the river for about 10 km before we arrived at the camp site. After we set up the camp we decided to go to landslide lake where we swam in freezing cold water. On the second day we tryed to hike to the Elk path but it was badly maintained. So we came back halfway through the hike. But it wasn’t totally usalless as we studied the Elk river by looking at different things like what bugs could be found on the water. Or the quantity of microplastics and the surroundings of the river. On the third day we hiked back to the cars for 10 km and we ate a very good and juicy burger in Campbell city. Then we drove to our next campsite were we took a nice and refreshing bath in the river.

Break day ! The boys woke up 30 min before the others to prepare the breakfast table and then we took turn to make the pancakes, nice and heavy breakfast followed by scientific experiences. We then had a little swim in the river and a nourishing taboulé beautifuly made by Ben. After that, laundry time ! Everyone was happy to finally have clean clothes ! But happiness wasn’t over because we ate some fat ass homemade ice cream and swam again. We ended the day with pasta and a werewolf game.

Day 10 Tofino day !! Today, we woke up at 8 am and ate good pancakes. Then we left to Tofino : a famous surfer spot on the pacific coast. We had a lunch on the Tonkin beach and bath in the pacific ocean : it was a great experience ! After we went visiting the city and does some shopping at a gift shop. At the end of the afternoon, we went to the long beach of Tofino, and we had a clean up action near the good waves. Time to go home : but with a lot of surprises !! First we saw a black bear on the road, we were in the car but at 5 meters : it was incredible !! Second was that we found a spot to had a second bath in the Kennedy River. Third was the fact we found next to the river a spot were we can jump. It was pretty high, like 8 meters. Some of us tried it and we were not disappointed : the jump was amazing !! and the water was really clear. We ended the day with a salad of tomatoes and mozzarella with Bébert the basilic. After this, time for a wearwolf !

We leave the camp at 9:30 after a good breakfast. A long drive was waiting for us. After 2hours, we took a break at the cowicham lake for lunch. After a good bath we finish the drive to the China beach campground. We built our camp and finish the report from the clean up of the long beach for Surfrider foundation. Some of us do chemical experience to test some samplings. We finished the day with a vegan burger, it was pretty nice.

This day might not be the best day we had in Canada but it was for sure one of the most unforgettable day. We started off the day by going on a hike on Juan de fuca trail on the side of the Pacific ocean, that was our first mistake. The trail was quite hard because of the mud everywhere and the air was quite damp which made everything worse. We all slipped at least a few times so we decided that we should walk back along the beach. That was our second mistake . We had to climb on some rocks to get to the other side of the beach , then we had to walk barefoot in the water to get to the other side and Guigui fell in the water. But at the end we went through. After we went at the swimming pool to take a shower. We had a very good time in sauna and we did a few front flip. That was very nice ! This day was finished by a big plate of pasta that was difficult to finish but very delicious !

Day 13 This day we woke up at 8am to go to our last campsite ..... On the road we did a stop to lunch near a beautiful river. We set up the camp and we started to prepare a presentation about our summer camp. We made a summary of the scientific activities. We will explain what we found to another water watch group in Lausanne through a visio call.

Day 14 After packing all our luggages we did a visio call with the other group studying microplastic in Lausanne. It was interesting to compare our studies with what they did.

Then we went to visit Victoria and saw the harbor. We made conclusions about our trip on the ferry back to the mainland. Tonight is the last night before getting the flight back to Paris ! 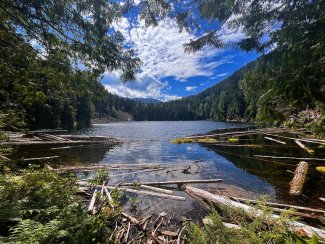 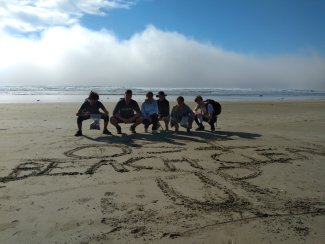